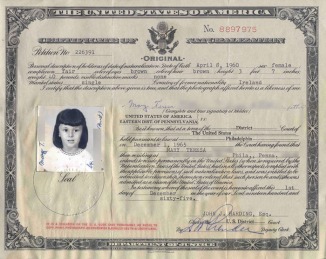 Another story like Irene Christenson’s.  Mary Carpenter has lived in the United States since 1954.  She became a naturalized U.S. citizen in 1960.  Now she’s trying to renew her driver’s license.  But despite providing her certificate of naturalization, she’s hit a snag.

[The Department of Driver Services]  told Channel 2 Action News they couldn’t comment on Carpenter’s situation. But a spokesperson says it could be the result of the SAVE program, or Systematic Alien Verification for Entitlements, implemented in January 2008.

SAVE uses a series of databases to verify citizenship. It may have hit a snag with looking at carpenter’s papers.

This is just the latest issue to arise during trips to driver services locations across metro Atlanta.

Since the 2005 Real ID Act, Georgia has slowly added new rules to align with federal requirements.

In July, the state began requiring additional documentation for license renewals turning visits here into all-day affairs. On Tuesday, the quoted wait time at the DDS location in Norcross was 6½ hours.

States have been given an extension to comply with Real ID. The deadline is now January 2013. After which maybe all of us will be spending the day with the DDS.

So Edward Rothstein writes a “review” of the Heart Mountain Interpretive Learning Center in Powell, Wyoming.  Heart Mountain was one of ten or so U.S. concentration camps located in desolate areas.  During World War II, the camps housed approximately 110,000 people of Japanese descent, two-thirds of whom were U.S. citizens. They hadn’t been accused of crimes. Intelligence didn’t suggest they were a threat to national security. They were rounded up and held without trial because of their race. Even small children and orphans.

Rothstein devotes about a quarter of his article to a review of the center.  The rest?  Rationale for the internment.

First, we’ve got the “they did it too” argument: END_OF_DOCUMENT_TOKEN_TO_BE_REPLACED 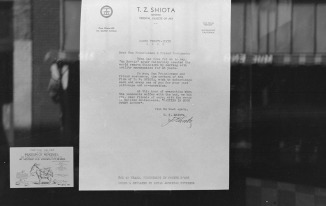 Time has come for us to say, “Au Revoir” after faithfully created the world renown Chinatown by serving with quality merchandise for 43 years.

To you, San Franciscans and friend customers, the members of the firm of T.Z. SHIOTA, wish to acknowledge each and every one of you for your past patronage and co-operation.

At this hour of evacuation when the innocents suffer with the bad, we bid you, dear friends of ours, with the words of beloved Shakespeare, “PARTING IS SUCH SWEET SORROW”.

Till We Meet Again, 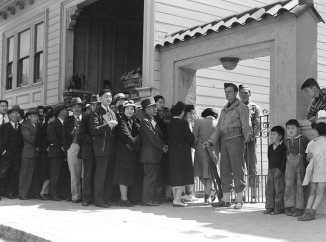 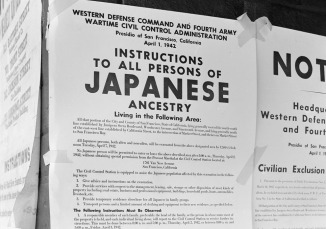 On a brick wall beside an air raid shelter poster, exclusion orders were posted at First and Front Streets in San Francisco, California, directing the removal of persons of Japanese ancestry from the first part of San Francisco to concentration camps.  The order was issued April 1, 1942, by Lieutenant General J.L. DeWitt, and directed forced removal from this section by noon on April 7, 1942. (NARA)

Alien and “non-alien” alike.  Babies and the elderly. 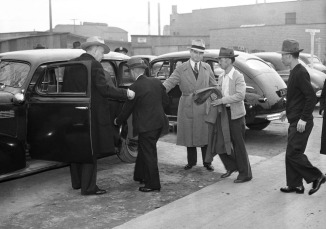 As long as white people are still privileged.  Because that’s what “diversity” means.

The Flushing food and sign wars rage on.  It’s about accommodating all ethnic groups.  The diverse community that should be represented.  Accommodating everyone.

Assuming, of course, that “everyone” means “white English speakers.”

Chinese people have resided in Flushing for more than thirty years. In Census Tract 865, where New York Mart replaced Key Food, 70 percent of the population is of Asian descent (2005-2009 Community Survey, interactive map here).  Seven percent are Latinos, African Americans are one percent, white people are twenty-one percent and the final one percent is “other.”  According to the 2000 Census, 75.9 percent speak a language other than English, 72 percent don’t speak English very well and 73.2 percent were born outside of the United States (source).

Chinese, Korean and Indian people appear to be three major groups of Asian descent in Queens.  (Could not find more exact data.)  So exactly who feels “unwelcome” by Asian food stores and businesses and non-English signs?

END_OF_DOCUMENT_TOKEN_TO_BE_REPLACED

…  Mangos reported on a Chinese lottery winner who wore a mask to remain anonymous while collecting his prize.

After the story, he said: “I don’t know why he bothered. I mean, I can tell you now — he’s Chinese.

“He’s got straight black hair and he’s got squinty eyes and yellow skin.”

And then he “apologized”: END_OF_DOCUMENT_TOKEN_TO_BE_REPLACED

Another article about birth tourists.  Be careful, because the hordes might overtake you.  And then you’d have  no chance of getting into UCLA.

Tam Phan came to the United States from Vietnam when he was six years old. He later became involved with a gang and spent 17 years in prison. He turned his life around and is now pursuing a master’s degree in urban policy and administration at Brooklyn College and is working at the Fortune Society, a nonprofit organization that helps ex-convicts reenter society. But Tam Phan has been given a final deportation order, and his only recourse is a pardon from New York Gov. David Paterson.