In which resistance perseverates about internalized crap.

I am still angry with Questlove’s casual racism.  And I am upset by the reactions and non-reactions of others, which serves to inform about the state of post-racial America.

Because in post-racial America, we are still talking about how Asians are being offended rather than how white supremacy is being supported.  The former puts the blame on those pesky Asians.  So thin-skinned.  No sense of humor.  Chip on the shoulder.

The latter puts the crap back where it belongs.

But there’s a ton of other crap to unpack in this racist occurrence.  First is the role of celebrity in our society.  The second is the manifestation of privilege.

One of my friends was a bodyguard for [redacted name of famous musician].  And he said Famous Musician’s problem had to do with the fact that everybody wanted to be his friend.  In Famous Musician’s case, this meant a ton of blow and other drugs.

Even if Mike is misbehaving.

And fame undoubtedly plays into privilege.  Privilege is a heavy drug of its own.  And getting a little taste of that privilege is like being let into the white club.

What better way to show white people you’re one of them than to support white supremacy?  Questlove’s manager (who is of Korean descent) had it wrong when she said she had a “yellow pass.”  She was getting the white pass.  She was tapping into the power structure.

Questlove said he just thought it was “funny-cute.”  Because it was just a joke to him.  I don’t buy it, and I think there is no place for intention when apologizing.

First, as I have explained ad nauseum, a focus on intention is a white-centered approach.  It’s the white pass.  It’s an attempt to evade responsibility.  It’s a weasel word.

If you put the focus on effect, what needs to be done is clearer.

The effect of those little “funny-cute” messages was to support white supremacy.  The system is a hierarchy.  You can guess who is on the top.  So when folks of color put forth messages that disparage other folks of color, they are buying into the system.  They are acknowledging that some people’s lives are not worth as much as other people’s lives.  And the system works best when everybody plays along.

But the other problem I have with intention is this:  WHO THE FUCK THINKS MOCKING OTHER PEOPLE CAN BE CLASSIFIED AS “BENIGN INTENTION”?

Because this is what Questlove did.  First he dragged out his tired old L/R jokes.  I might point out that he had done it in the past, been called on it, and still thought it was funny enough to repeat a year later. 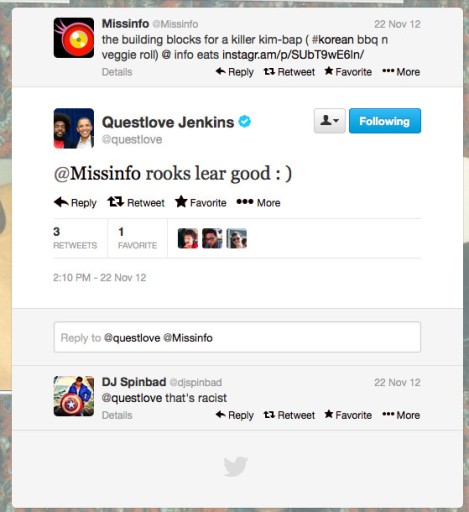 To which DJ Spinbad replied:

Questlove started his “funny-cute” L/R joke by writing “is it racist for me to write …”  I’ve always maintained that when people start by saying “This may be racist, but …” or “Is it racist if …”, they are going to finish with something completely assholish and racist.

This was no exception.  Undoubtedly Questlove knew it was racist.  He just thought the fun he was having made it okay.  Even if it was at the expense of other people.

Let’s make this really clear.  Posting videos of private individuals on the internet without their permission in order to ridicule them with racist remarks negates any claim of benign intention.  It is racist and dehumanizing.  Even if Questlove didn’t think it was “Duck Dynasty/Phil Robertson mean spirited-xenophobic dumb.”

Because mean-spirited?  Check.  Xenophobic?  Check.  Dumb?  Check-check.  (The second checkmark is for being stupid on the internet.)  Asshole?  Check.

But getting back to my original shouted point once again:  WHO THE FUCK THINKS MOCKING OTHER PEOPLE CAN BE CLASSIFIED AS “BENIGN INTENTION”?

That was a rhetorical.  Because I’ll tell you who.  A huge slab of the nation, that’s who.  Because I have been involved in discussions of racism and bullying and this comes up Every. Single. Time.  Because people just love to get their ching chong on.  When called on it, defenders say that they “didn’t mean anything by it.”

Which is a reflection of how racism strips people of the ability to develop critical thinking.  Because this one is a no-brainer.  Yet people struggle so hard with this concept.

Well, he didn’t mean anything by it …

We have been given so many constant, reinforced messages that racist shit is perfectly acceptable that most people can’t even begin to imagine that it might not be.  It represents not only a huge inability to think critically, but a failing of empathy.

Learning about racism is unfortunately merely by rote.  People learn the word nigger is wrong, but don’t understand the simple theory behind the why.  So they need to be told that chink is wrong too.

Except so many people will tell you there’s nothing wrong with it.

bell hooks wrote that not even the most astute critical thinker can begin to completely deconstruct the covert and overt messages we receive constantly through media.  And when a famous, popular member of the media sends these messages, the harm is magnified.

It goes back to that celebrity status again.  The “cool factor.”  And it encourages other people to do likewise.  (I should note that some people who objected to this demonstration of white supremacy did in fact receive ad hominem attacks that used the L/R thing.)

But when people apologize (and even when they “apologize“), others are quick to laud them.  Because they didn’t really need to apologize (or “apologize”) in the first place.

Then typically they are all about Well I apologized.  What more do you want?

Questlove is reportedly blocking some posters because of “trolling.”  Which indicates to me that words do, in fact, have power.  Power to harm.  Power to hurt.

And words reinforce a system in which some people are valued and others are not.  In which some are human and some are not.  Dehumanization is necessary before physically harming another.  And hate speech typically precedes hate violence.

So yeah, I did not think it was funny-cute.  I thought it was a scary look inside.

Edited to correct the name of the person who said she had a “yellow pass.”

6 thoughts on “And it runs deep, part ii”